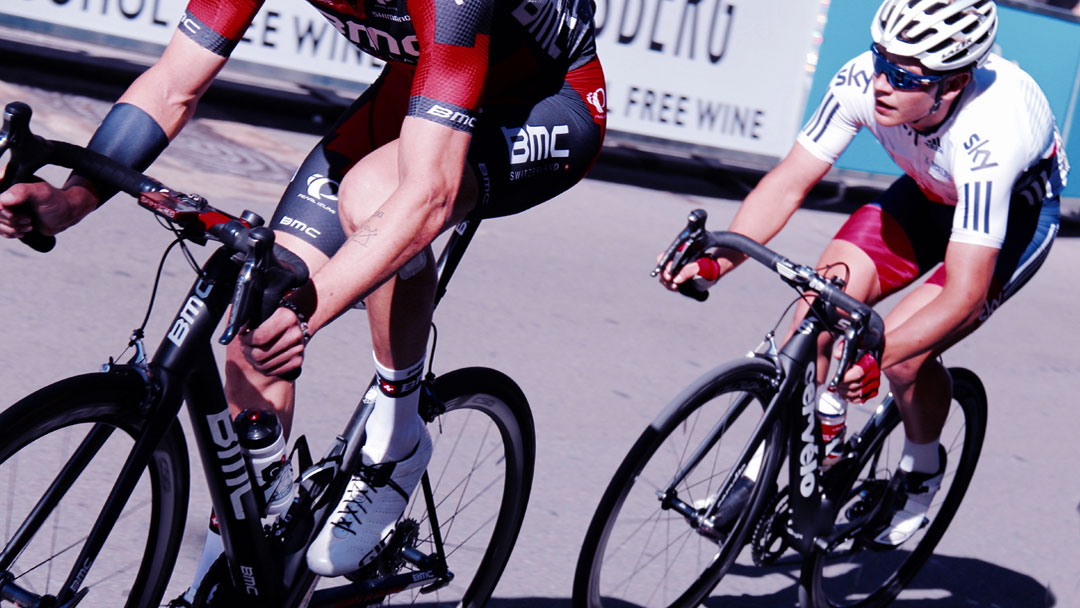 You can create your own training zones based on your personal fitness. If your highest power output during a 1 hour bike ride is 200 watts, you could call this your threshold. Training zone 2 for instance, could then be about 75% of your power threshold. You can do the same with speed or heart rate instead of power and you can use this principle for all kind of sports like running and swimming. For now, let’s stick to cycling.

If your threshold is at 200 watts and a pro’s threshold is at 400 watts, your zone 2 at 75% is at 150 watts and the pro’s zone 2 would be at 300 watts. Those intensities are relatively the same: both 75% of the personal threshold. But is your zone 2 always comparable with someone else’s zone 2? Is the impact on the body and the training effect always the same if you compare two different athletes in the same training zone? This was the question of the Fast Talk podcast #109.

At low intensities like 100 watts, a pro cyclist’s engine will burn less energy than an amateur’s engine. In other words, at low absolute intensities a pro is more efficient. When looking at relative intensities like training zones, research shows the pro and amateur rider will be equal efficient. So, when the pro and the amateur both ride at 75% of their personal threshold, the pro and amateur need the same amount of energy per watt. Since the pro rides two times the power of the amateur, the pro will burn more energy. When looking at the actual numbers, that sounds logic. A pro burns more energy when riding at 300 watts than an amateur at 150 watts.

Burning more energy comes with using more oxygen. So, the pro will need more oxygen in their muscles when in zone 2 than the amateur will in their zone 2. You could assume that because the pro is burning more energy and using more oxygen, his or her zone 2 is harder than the amateur zone 2. In the Fast Talk podcast, exercise physiologist Jared Berg indeed says that pros can have a training effect at low (relative) intensities at which recreational cyclists would say it is to easy. When an amateur finds 3 hours in zone 2 easy, the training effect could be less than when a pro rides 3 hours in zone 2.

Now let’s flip the coin. While the engine may cost more energy during zone 2, the car – or body – of the pro is better built. It won’t rattle apart despite the big engine. It will recover faster than an amateur because it is better in cleaning up the mess after a long training ride. It is also better known to long training hours in the saddle. You could therefore just as well say that a zone 2 ride is easier for a pro than for an amateur.

So, the question is still not solved yet. Is your zone 2 comparable to my zone 2? The Fast Talks podcast finishes with an interesting twist in the question. What if you start by comparing yourself to yourself? When you are fit, your zone 2 might be at 230 watts vs 200 watts when you are not fit. Do you feel both intensities being equally intense? Think about it and let us know!

I think in the future we should stop creating training zones based on a percentage of one parameter like threshold. We should start creating training zones based on several parameters, and not percentages of those parameters. Zone 2 could than for instance be based on your maximal fat oxidation instead of a percentage of something else. We would then find that every person is unique, and that every personal zone 2 is at a different percentage of threshold. Let me know what you think of the discussion above! Is zone 2 harder, equal or easier for a pro?

Founder of Molab, Human Movement Scientist and a sports enthusiast.